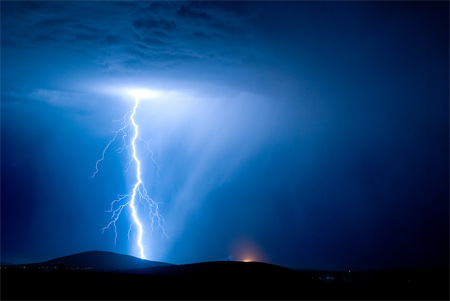 Aristotle believed that thunder was caused by the collision of clouds.

Wikipedia defines ‘Thunder as the sound made by lightning. The sudden increase in pressure and temperature from lightning produces rapid expansion of the air surrounding and within a bolt of lightning. In turn, this expansion of air creates a sonic shock wave which produces the sound of thunder, often referred to as a clap, crack, or peal of thunder.’

Earlier this week I was awakened from my slumber by a massive storm rolling through North Texas. A flash of white light flooded the room for a nanosecond. It blinded me for a few moments. Then, I could hear thunder being born in the distance, that crackling sound somewhere in the atmosphere. I could perceive the general direction of its origin but I could not pinpoint the exact place where the sound was created. After its emergence, its echo faded into silence. Then, a distant rumble made its way toward our location. As it approached, it grew louder. The reverberations caused by the low frequency shook the earth. The force compressed the air and my entire home was engulfed by a shock wave which vibrated everything in its path. It was if a giant locomotive was rushing through our home. It was at this moment that I truly appreciate the magnificence and power of thunder.

Thunder is unique, effective and gives lightening a voice. The combination of the thunder and lightning is creative genius. Thunder has the power to stop everything for a moment. It provokes silent awe and makes us feel small. Thunder does not discriminate. It will shake the earth and everyone and everything in the area. Thunder has the power to impact us and we become aware of something bigger than ourselves, something sovereign and powerful.

I am convinced that there are people quietly creating thunder in our world. Their lives, their message, and their passion make us stop, take notice and point to something bigger than ourselves. The thunder they create reflects the brilliance, power and purity of the real thunder we experience during a storm.

Perhaps it is a noble endeavor to create some thunder in our culture that shakes the world out of its slumber.