Father and son – A Voice in the Darkness 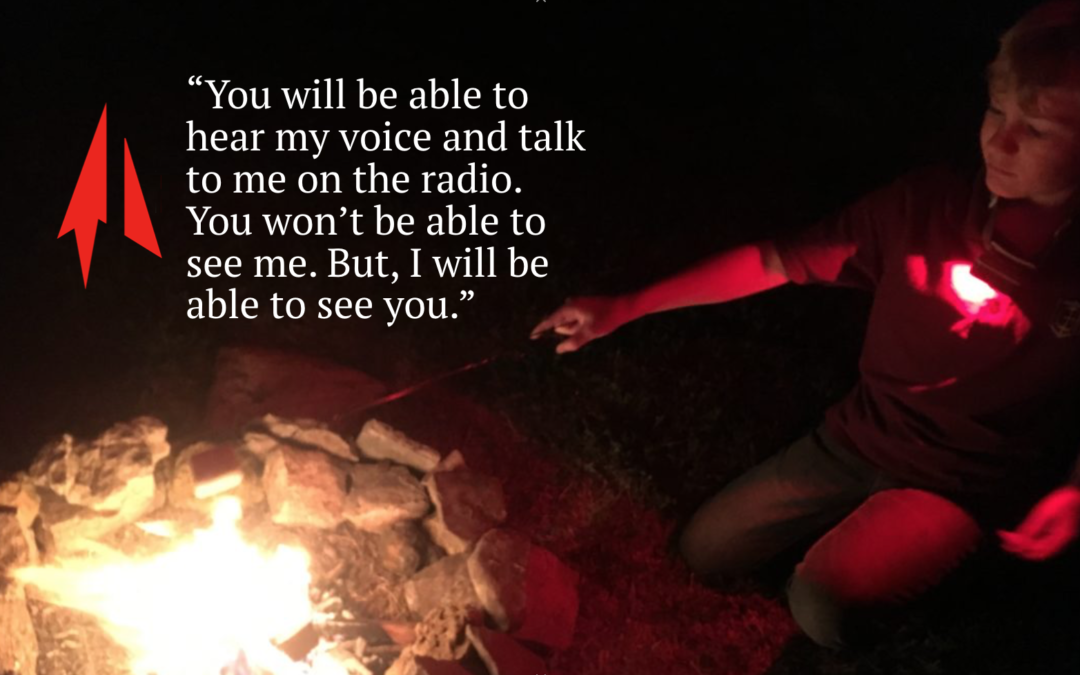 Last weekend, I took my 9 year old son (Nelson) for an overnight camping adventure at our ranch.

I had three objectives. First, to invest time into my son’s life. Second, teach him practical outdoor skills while feeding his sense of adventure. Third, each activity was designed to point him toward authentic manhood. All the while, pushing him outside his comfort zone surrounded by God’s amazing creation.

Upon arrival, I gave him a gift. It was a small field med-pack with a headlamp (red light), a striker, one chem-light (aka: glow-stick for all you ravers), a multi-tool, a small LED light to illuminate the inside the bag at night, a zip-lock with several cotton balls soaked in Vasaline petroleum jelly, a small first aid kit, a wrist compass and a two-way radio. I instructed him to keep the pack with him at all times.

Before sunset, our first lesson was to learn how to start a fire without conventional ignition, like matches or lighters. We gathered rocks, tinder and wood. Then I demonstrated how to ignite a tinder ball using a striker and a cotton ball covered in Vasaline.  Nelson practiced a few times before dinner.

We dawned our packs and made our way down to the pasture gate in the darkness. I instructed him to turn on his red-light head-lamp and close the pasture gate behind him. I prayed and read Bible passages about loyalty, leadership and humility over him. We turned on our two-way radios and tested our comms. Loud and clear.

“What are we going to do, dad?” he asked with a great deal of uncertainty.

As I put the compass on his wrist, I said, “Son, I am going to walk 250 yards down the path. You will stay here until I call on the radio. When I call, you will begin walking on a southwest heading, keeping on the path. Do not wonder off the path. As you know, there are cactus, snakes and trip hazards out here.” I continued, “Down the hill, there is a tree with a green chem-light hanging in it. I will meet you there.”

Coyotes were howling all around and the moon was not quite high enough to give much light. The red headlamp only emits enough light to illuminate the ground a few feet in front of you.

With his voice a little shaky, he uttered the words I expected, “Dad, I’m a little scared.”

I replied, “Son, there is nothing to be afraid of – this is just a new environment for you.”

When I arrived at the tree, I made the radio call to Nelson. I could see his red light up the hill begin to move toward my position. He radioed that he was still afraid. I encouraged him to keep walking down the hill. “I can see you. You are doing a great job son. Keep going!”

As he approached our meeting point under the tree, he couldn’t see me in the darkness. So, I called out to him without the radio. Nelson trotted over to me. He was so excited, I was too. Hive-fives and hugs around the board. I congratulated him and read Bible passages on purity, honesty and self-discipline to him.

After a drink of water and another radio check, I told him we had a second objective – further into the pasture. The terrain is rocky with a little creek running through it. There would be another tree with a chem-light hanging in it. I walked ahead into the dark to the meeting place and called him over the radio to begin walking. He could hear my voice but couldn’t see me. But, I could see him.

He arrived at the tree excited and confident. I instructed him to take off his pack, get out his striker and fuel. “Are we going to start a fire here?” he asked. I replied laughing, “YOU are going to start a fire!” We cleared a small space and he gathered tinder. With minimal guidance from me, he assembled a small bundle and put the petroleum jelly soaked cotton ball in the center. After several minutes of failed attempts, he produced a giant spark that landed in the center of the bundle. We had fire!  The boy had built his first fire.  I could see his self-confidence and satisfaction on his face.

As we hovered over the tiny flames, I read scripture about excellence, integrity and perseverance over him and I prayed. He was so excited. We put out the tiny fire, put on our packs and headed back to the pasture gate where we had begun.

This time Nelson would lead the way and I would follow. We talked and laughed as we walked in the darkness. Looking forward to building a camp fire and roasting some marshmallows. We would sleep beneath a blanked of stars.  Nelson had conquered fear, learned something about listening to the father’s voice in the darkness and learned perseverance through fear and adversity.

Maybe you are in the darkness right now. The darkness can be a dreadful place. However, our heavenly father can see us and we can hear his voice in darkest night. You can call out to him. He will answer.

Special Note: The ideas for this activity with my son originated with a book called “Raising a Modern-Day Knight” by Robert Lewis and operations with Ironcenturion. Thanks guys for your creativity and leadership.