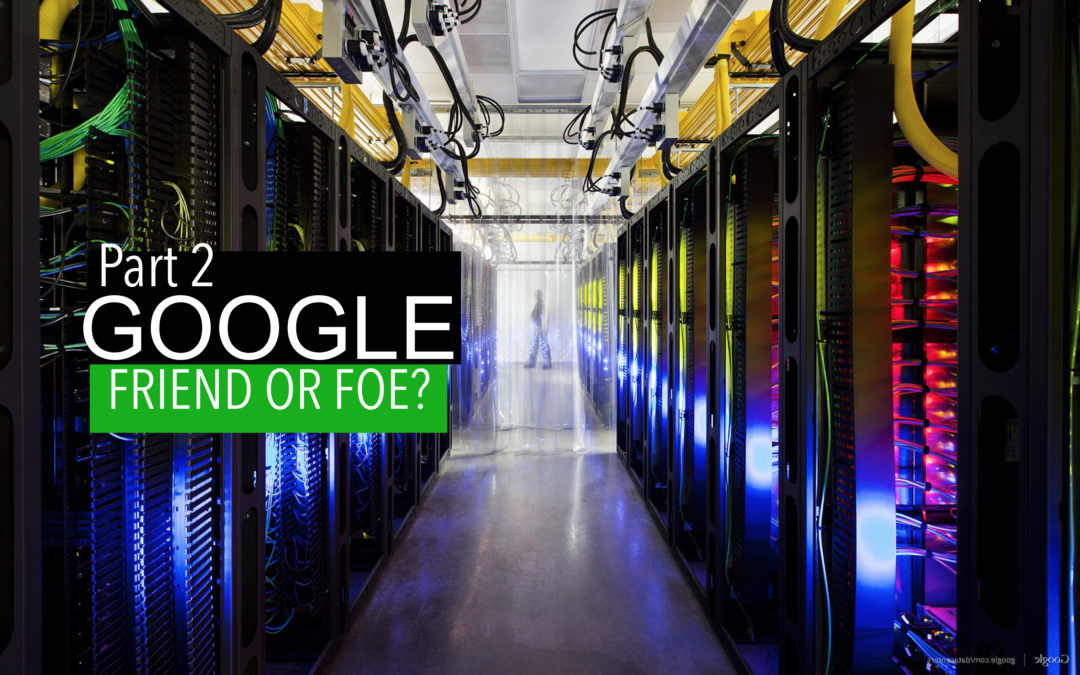 Welcome to Part 2 of my blog series about Google. If you have not read my first post, I’d recommend reading Google: Friend or Foe Part 1 before continuing. Part 2 builds on the foundation of my previous post.

I think the best way to understand “What Google is actually doing?” is to see that  Google is in the “thought-shaping” and digital human data-trafficking business.

When an organization’s stated mission is to “organize the world’s information”, we know that based on what Google does with information tells us more about the purpose. Information shapes thought. Thought and beliefs drive behavior. Therefore, I submit that Google is shaping thoughts of billions of people and by extension, driving behavior. But, to what end?

What is Google actually doing?

YouTube, AdSense, FitBit, Nest, DoubleClick and over 200 others are not the end of Google’s reach. Google is a major stake holder and data repository for genetics-testing company 23andMe. Seems harmless enough. However, 23andMe is partnered with big pharma drug giant Gloxo-Smith-Kline for research into disease using data collected. Most 23andMe customers are unaware of this. [source link]

“In its filing, Google also noted that Anne Wojcicki is a co-founder of 23andMe and is a member of the board of directors. Wojcicki is married to Sergey Brin, Google’s president of technology and company co-founder. The search giant also outlined other intertwined relationships beyond Brin and Wojcicki: Sergey also holds approximately 35 percent of Google’s Class B common stock. Prior to Google’s investment in 23andMe, Sergey provided approximately $2.6 million in interim debt financing to 23andMe…” [source link]

In other words, Google is interested in genetic data on millions of people. That’s of interest to me.

Google surveillance in your home

On the home front, Google’s purchase of Nest is an interesting play. Nest is well known for their ‘smart’ thermostats and ‘user-friendly’ security camera systems for homes and businesses. What is not so well known is Google placing microphones on their in-home ‘smart’ thermostats. Apparently, Nest ‘forgot’ to include the one feature most people concerned about privacy care about on their product feature list for in-home thermostats – a microphone. [source link]

Of course, there is Google Home, a virtual assistant similar to Amazon’s Alexa and Apple’s Siri.  These devices are constantly monitoring or ‘listening’.

Additionally, Google has filed a few interesting patents. Perhaps, ‘invasive’ is a better descriptor. These new technologies use artificial intelligence (AI) to analyze other technologies inside the home, clothing, chemicals and even voices in your home. [source link]

Google made inroads into the smart phone market. It’s Android mobile operating system has dominated the mobile market. Its devices are cheap and come loaded with Google apps. The Android operating system is collecting data on users who may not use Google’s other products or platforms. There are 2 Billion Android users worldwide as of 2017. [source link]

Google surveillance at your child’s school

Google also launched it’s Google ChromeBook, cloud-based personal computing hardware. It’s also very cheap but you’re locked into Google’s offerings with the device. The key to understand its growing pervasiveness in schools is knowing that the low price-point is a strategy to gain marketshare and essentially aimed at data collection. If a child is forced by his school to use a Google ChromeBook, he is being groomed to grant access to his data to a tech giant for life. How will that data be used?

Google is being sued in New Mexico for collecting and misusing data on children who are required to use ChromeBooks in schools. [source link]

The growing ‘tech in the classroom’ or “edtech” industry is worth BILLIONS of dollars. So, there is a huge push by big tech to cram as much technology as possible into classrooms and homes in the name of “better education.” There’s little to no research supporting the pervasive use of tech in the classroom is beneficial. In fact studies are proving that “the digital interface does not stimulate the brain as well as an analog interface. Off-loading the cognitive effort that makes critical brain connections stronger is like paying someone else to do your exercise for you.”

Google surveillance on the school bus?

“In places such as Hot Springs, Va., Alphabet Inc.’s Google has wired school buses, turning them into rolling study halls for students with long commutes and sometimes patchy or nonexistent Wi-Fi at home. Google says the program, a pilot which is in 15 school districts in 13 states, will be funded at least through the end of this school year.” [source link]

Google Maps was the best free mobile GPS system available… until Waze was introduced and began giving Google Maps a run for their money. Google acquired Waze for nearly a $1 Billion before Apple or another competitor could buy them. [source link]

All of this and more on top of the world’s most powerful search engine and email client used (Gmail) [source link].  While most know that Google stores personal data related to search, few are aware that Google is collecting data from Gmail accounts. [source link]

Are you starting to see a pattern? A good detective identifies behavior patterns. Patterns lead to evidence.

Google may have begun with good intentions but as I have demonstrated they have followed a path of bad actions that are a cause for concern.

BTW. None of this has gone unnoticed by the Feds, the U.S. Department of Justice has ramped up it’s investigation into this tech behemoth. [source link]

Why do companies like Google and Facebook offer their products for free or cheap?  Because their surveillance business model turns the user into the “product” they can sell.  Google and Facebook are in the ‘Digital Human data-trafficking” business.  They manipulate people and sell the digital profiles of billions of people.  They surveil you and sell everything they know about you to the highest bidder … and you let them.

In my next post, we’ll talk about the type of threat companies like Google pose and what can we do about it.

Reference note: Much of my interest and research in this section was initiated from a podcast of the Bill Walton Show Episode 63: Part 2- The Power to Re-engineer Humanity