Political Correctness: Inside the Matrix of Your Politicized Reality 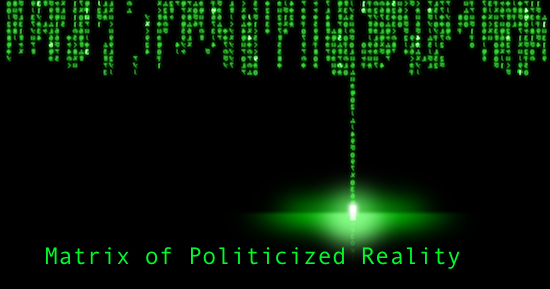 Have you ever seen the film ‘The Matrix’?

Have you ever felt like Neo (Keanu Reeves)? You are aware that there is a problem with reality but you can’t quite put a finger on it. You sense a ‘glitch’ in the matrix.

“The Matrix is the world that has been pulled over your eyes to blind you from the truth.” What you know you can’t explain, but you feel it. You’ve felt it your entire life, that there’s something wrong with the world. You don’t know what it is, but it’s there, like a splinter in your mind, driving you mad.” – The Matrix

For the last 60 years in America, our reality has become increasing politicized. Our thinking has become ‘politically correct‘. In addition, everything we say or do contains a political tone. This matrix extends into our families, relationships and shapes our reality. We have been conditioned to exist in this politicized reality without realizing it.  Western culture has been invaded by a virus called ‘Political Correctness’.

Our schools, arts and media have implanted a distorted version of reality into the minds two generations of Americans. The hold on the psyche is so strong that when an individual makes a conscious effort to question this reality, he or she is slammed down into conformity of the politically correct narrative.

Unfortunately, folks are ignorant to the fact that they exist in this warped world. However, it’s time to pinch yourself and understand that almost everything you think, say or do is politicized. This distorted reality is not based in truth. Of course ‘truth’ itself is not of any value within the politically correct matrix. The politicized reality is devoid of meaning. Our minds are divided in a dichotomy of reason and non-reason.

We go along quietly in fear of ‘offending’ someone with truth.

“The walls of our cultural matrix are heavily defended by sentinels who are armed with language and legal weapons of coercion (aka name-calling & lawsuites).”

When we speak the truth, we open ourselves up to a barrage of loaded names ending in “-ist” and further intrusion into our lives designed to suppress the truth, crush our spirits and re-conform our minds and behavior to the narrative. Entire institutions are so invested in the politically correct matrix that they consciously choose to reject the truth and believe a lie in order to defend their investment.

“The Matrix is a system, Neo. That system is our enemy. But when you’re inside, you look around, what do you see? Businessmen, teachers, lawyers, carpenters. The very minds of the people we are trying to save. But until we do, these people are still a part of that system and that makes them our enemy. You have to understand, most of these people are not ready to be unplugged. And many of them are so inert, so hopelessly dependent on the system that they will fight to protect it.” -The Matrix

Is this the reality we want for ourselves and our children?

You have a choice…
Just like the movie, ‘The Matrix’, the politically correct matrix of reality is a manufactured illusion.  It is a form of psychological and mental bondage and suppression of free thought. We must realize that. You can choose to turn back in denial or ‘see how deep the rabbit-hole goes’. The choice is yours…

Did You Know?
Neo’s room number in The Matrix is 101. Room 101 in George Orwell’s novel ‘1984’ is where people are sent to be tortured and brainwashed into believing things that aren’t true.