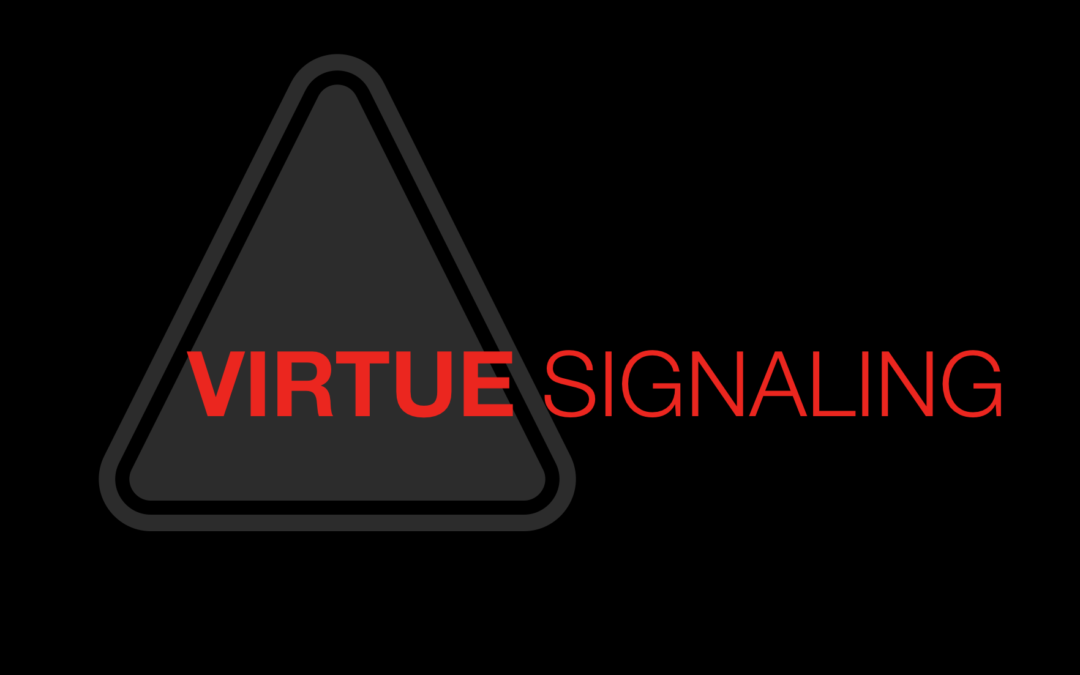 I’m addressing the Church (the body of believers redeemed and reconciled to God through Jesus Christ’s death, burial and resurrection).

Virtue Signaling is the secular world’s version of repentance. Everyone, and I mean everyone with a social media account is expected, pressured or coerced to virtue signal. Should Christians be caught up in this? I’m guilty of folding under cultural pressure at times. So, I’ll let you be the judge of your own heart and draw your own conclusions.  The following is aimed toward my heart as much as your’s.  I wrote about Hashtag Culture in 2018 and that accomplishes very little.

What the culture says:

Virtue Signaling Defined: the sharing of one’s point of view on a social or political issue, often on social media, in order to garner praise or acknowledgment of one’s righteousness from others who share that point of view, or to passively rebuke those who do not.
The term virtue signaling is often used to accuse someone of trying to win praise for showing support for a social cause without actually doing anything meaningful to advance it. This charge is often used against people for being self-righteously “woke” on social media.
The Conspicuous expression of moral values

Let’s look at some key characteristics of Virtue Signaling:

The “whys” above point to our motives…

What the Bible says:

Matthew 6:1-4 “Beware of practicing your righteousness before other people in order to be seen by them, for then you will have no reward from your Father who is in heaven. “Thus, when you give to the needy, sound no trumpet before you, as the hypocrites do in the synagogues and in the streets, that they may be praised by others. Truly, I say to you, they have received their reward. But when you give to the needy, do not let your left hand know what your right hand is doing, so that your giving may be in secret. And your Father who sees in secret will reward you.”

QUESTION: What is the motivation of your heart?

Proverbs 3:27 “Do not withhold good from those to whom it is due, when it is in your power to do it.”

QUESTION: Do you actually DO GOOD works? Or just virtue signal good intentions?

Proverbs 6:16-19 “There are six things that the Lord hates, seven that are an abomination to him: haughty eyes, a lying tongue, and hands that shed innocent blood, a heart that devises wicked plans, feet that make haste to run to evil, a false witness who breathes out lies, and one who sows discord among brothers.”

QUESTION: Does what you say or signal bring about unity or discord?

Proverbs 12:22 “Lying lips are an abomination to the Lord, but those who act faithfully are his delight.”

QUESTION: Are you faithfully taking actions in line with your words that bring honor to God and point people to Christ?

Psalm 139:23-24 Search me, O God, and know my heart! Try me and know my thoughts!
And see if there be any grievous way in me and lead me in the way everlasting!

Romans 12:17-21 “Repay no one evil for evil, but give thought to do what is honorable in the sight of all. If possible, so far as it depends on you, live peaceably with all. Beloved, never avenge yourselves, but leave it to the wrath of God, for it is written, “Vengeance is mine, I will repay, says the Lord.” To the contrary, “if your enemy is hungry, feed him; if he is thirsty, give him something to drink; for by so doing you will heap burning coals on his head.” Do not be overcome by evil, but overcome evil with good.”

QUESTION: Ask God to search your heart, are you seeking God’s justice or vengeance or something else?

Romans 16:17-18 “I appeal to you, brothers, to watch out for those who cause divisions and create obstacles contrary to the doctrine that you have been taught; avoid them. For such persons do not serve our Lord Christ, but their own appetites, and by smooth talk and flattery they deceive the hearts of the naive.”

QUESTION: Are you orientating yourself to the truth of God’s word or the falsehoods of the world?

What is the solution?

1 John 1:9 “If we confess our sins, he is faithful and just to forgive us our sins and to cleanse us from all unrighteousness.”

Romans 2:4 “Or do you presume on the riches of his kindness and forbearance and patience, not knowing that God’s kindness is meant to lead you to repentance?”

Romans 12:2 “Do not be conformed to this world, but be transformed by the renewal of your mind, that by testing you may discern what is the will of God, what is good and acceptable and perfect.”

Luke 8:15 “As for that in the good soil, they are those who, hearing the word, hold it fast in an honest and good heart, and bear fruit with patience.”

James 1:22-25 “But be doers of the word, and not hearers only, deceiving yourselves. For if anyone is a hearer of the word and not a doer, he is like a man who looks intently at his natural face in a mirror. For he looks at himself and goes away and at once forgets what he was like. But the one who looks into the perfect law, the law of liberty, and perseveres, being no hearer who forgets but a doer who acts, he will be blessed in his doing.”

In conclusion, Biblical faith is faith is rooted in words from scripture, animated by the Holy Spirt and expressed in actions by individual obedient believers.  We don’t just signal the problems with the broken world, we have a cultural mandate that commands us to DO something about it.

One of the most effective ways to bring restoration is to serve those around you; the poor, the needy, the prisoner, the widow and the orphan.