Have you ever walked out of a large shopping center in the middle of the summer and forgotten where you parked? It’s blazing hot and feels like its 150 degrees. You’ve already had a long day. Forgetting where you parked your car among a sea of vehicles is just the cherry on top, right? This happens to me more time than I’d like to admit.

Several years ago, I raced in my first triathlon. A triathlon consists of a swim, bike and run (in that order). The area where athletes transition from one sport to the next is called, you guessed it the ‘Transition Area’. The transition area contains racks with hundreds, sometimes thousands of bikes and it is swarming with overworked athletes trying to move from one sport to the next as quickly as possible. Each athlete gets less than two square feet of space for all his/her race gear. Each space is marked by the athlete’s race number. It can get a little tense in transition.

After I exited the swim leg of my first triathlon, it had begun to rain and got cold. I was tired as I stumbled into the transition area. I started running to my bike only to find that my bike was not there. Who the heck stole my bike? I was mad. Then I noticed that I was not in the right place. Confused in the midst the chaos of the transition area on a cold rainy morning, I froze up. Luckily, a kindly stranger sensed my confusion. “Hey man, can’t find your bike?” I replied, “nope!” He said, “look at your race number and go find your bike!” I looked at my race number on my arm, And we both began to chuckle. I found my bike.

I learned a valuable lesson that morning. All the physical training in the world won’t do me a lick of good if I get lost in transition. So, part of my pre-race prep is to walk my path through the transition area from swim to bike and bike to run. I pick out visual markers along the way. That way when I’m tired and out of my mind, at least I won’t get lost.

So it is with life. We can put in the long hours at work. We can put tremendous effort into our marriages or relationships. But, life is always changing. The environment is never the same. It changes moment by moment. Sometimes we are tired and our minds are weak. That is when something happens that throws us off course. We know where we want to go but we get lost in transition along the way.

Stop getting lost in transition
I have made a habit of doing a pre-race prep every morning while the family is still sleeping and quiet. I spend time in prayer and studying the Bible. I go over the most important tasks of the day and pick the one that is the most urgent and put it at the top of the list. If I get nothing done today but this one thing, my day will be a success. I guard my quiet time in the morning. When I prepare, no matter what the day throws at me, I don’t get lost in transition.

“Prepare your work outside; get everything ready for yourself in the field, and after that build your house.” (Prov. 24:27 ESV)

BTW, if you see a bald guy walking through a crowded parking lot in the middle of the summer clicking the alarm button on his keys, have pity on him, because its probably me 😉 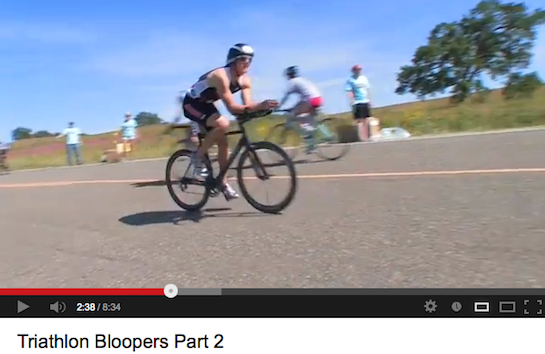 Do you get lost in transition?