Pursuing Peace this Christmas: A lesson from WWI 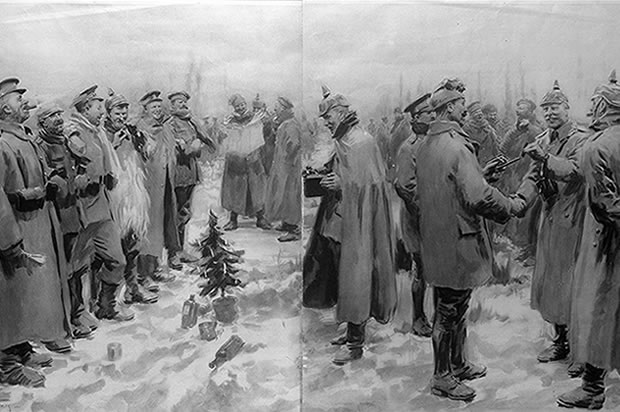 World War I was thought to be the ‘war to end all wars’.

It was a bloody conflict that dragged on for years. Both sides were entrenched in the mud and blood across Central Europe in a stale-mate. Between the trenches lay ‘no man’s land.’ When either side called their boys to charge, it was a death sentence. The charging soldiers who emerged from the safety of their trenches would be mowed down like fresh blades of grass by enemy machine-gun fire. From 1914 to 1918, 9 million soldiers and 7 million civilians died.

One cold winter’s night early in the war the guns fell silent. In late December 1914, young men emerged from the trenches and greeted each other. The Allies and Germans met in ‘no man’s land’ in an unofficial truce. It was a Christmas ceasefire where men of goodwill but of opposing politics and heritage met in the most dangerous place in the world at the time, ‘no man’s land.’

Over the years, I’ve learned that Christmastime is much like ‘no man’s land’ for many.

Conflicts and turmoil within families have killed any spirit of goodwill or peace among kin. Practically all joy has disappeared as hearts sink and tensions rise among family members. The wounds are so deep that many refuse to leave their trenches.  They remain alone on Christmas. Others attempt to endure with family by showing up physically while their hearts remain in the trenches. As bitter winter winds sweep through our towns, bitter spirits chill hearts and the soul shivers from lack of warmth and love.

Having personally come from a complicated and conflicted family, Christmas was a time of the year I wanted to skip usually. Although the situation has been healed and I cherish Christmas today, I understand what many are going through.

In his moving book, ‘Silent Night’, Stanley Weintraub captures the story of the Christmas Truce during WWI. Enemies emerged from the cold, wet trenches to meet in ‘no man’s land’. They erected Christmas trees, played games, exchanged pleasantries and mementos. For a few short hours sworn enemies became men of goodwill.

The Christmas Truce of 1914 began with one man’s courage and goodwill. History does not record this man’s name but his action spread up and down the enemy lines in Europe. One man of goodwill, took one step into ‘no man’s land’ and changed everything.

Perhaps you are dreading the days ahead and coming into contact with family or friends who have become enemies over the years. Maybe the wounds run so deep, you can’t possibly bring yourself to be in the same room. The trenches have been dug and ‘no man’s land’ is so frightening, why even go there?

What would it be like if you stepped out of your trench and into ‘no man’s land’?

What would have to change in your own heart to suspend your thoughts about the enemy and meet him or her as if you did not know them at all? Treat them as if they were a friendly stranger who just wished you a Merry Christmas?

Pursuing Peace:
Peace begins in the heart and is acted upon through the will in one person. One person makes one bold move and others respond. It is not about building consensus. It is about having courage. Sowing the seeds of peace will reap a harvest and potentially change the trajectory of a relationship.

A Peace Promise with yourself:
An old hymn points out that peace is seated in the will and heart of the individual.

“Blessed are the peacemakers, for they shall be called sons of God.” – Matthew 5:9

“Peace I leave with you; my peace I give to you. Not as the world gives do I give to you. Let not your hearts be troubled, neither let them be afraid.” – John 14:27

Do you want to pursue peace?