Today (November 11, 2005), my wife and I decided to journey to the WTC site. I was apprehensive about what I was about to experience.

Never in my life had I hated clear blue skies, but for a few moments today, I did.

Below are photos from my 2005 visit to World Trade Center site. Click to enlarge. My reflections follow the phots. 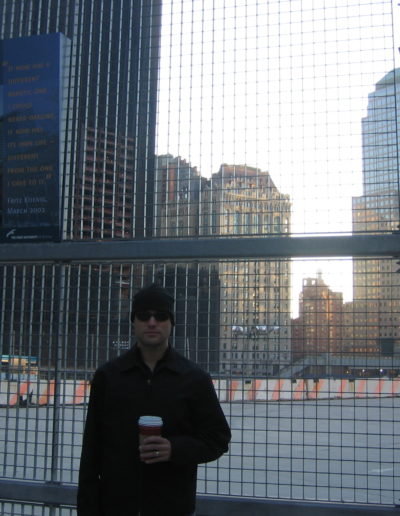 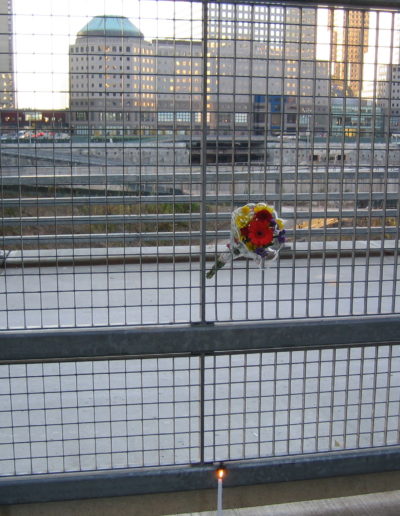 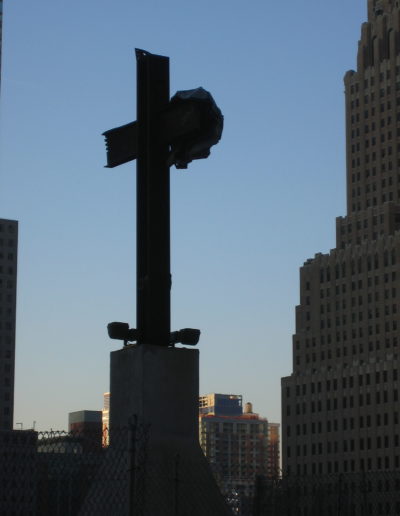 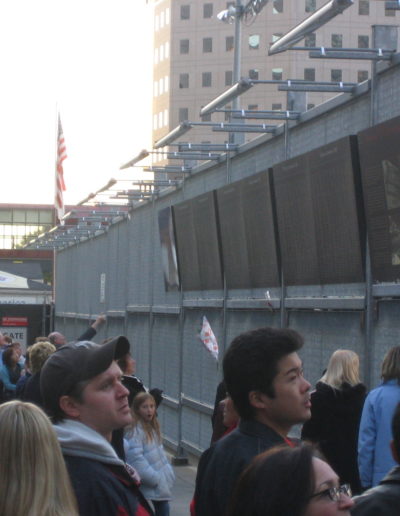 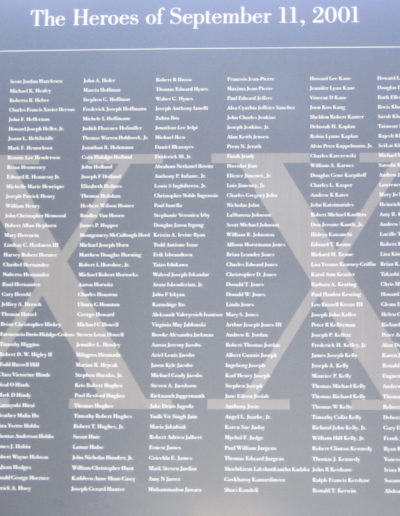 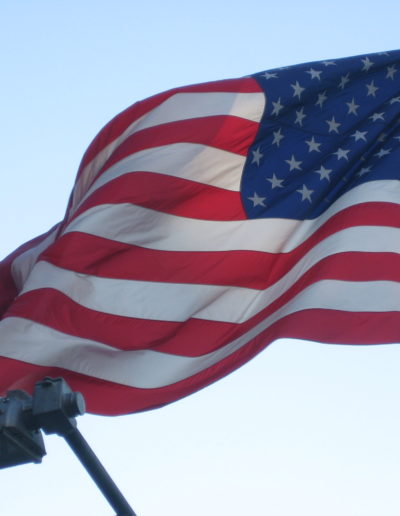 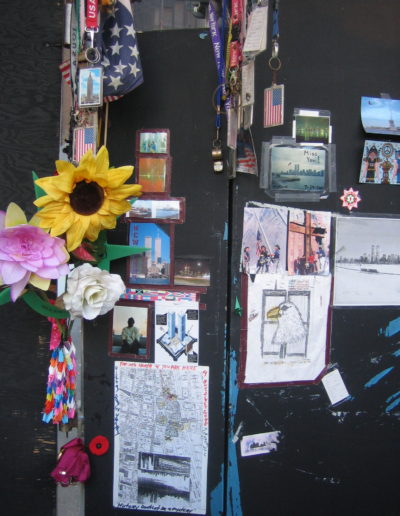 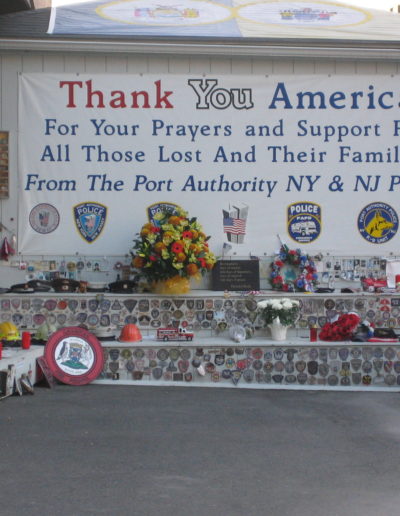 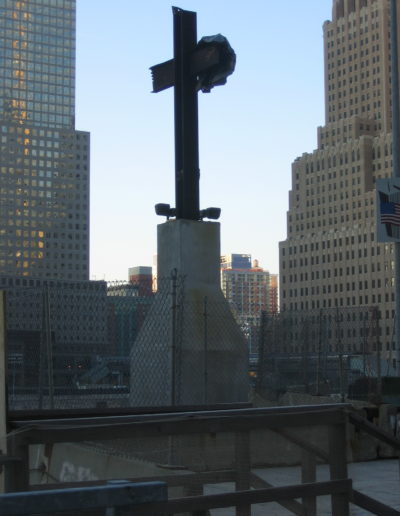 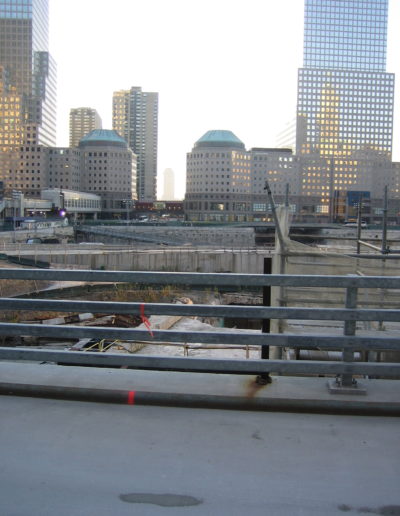 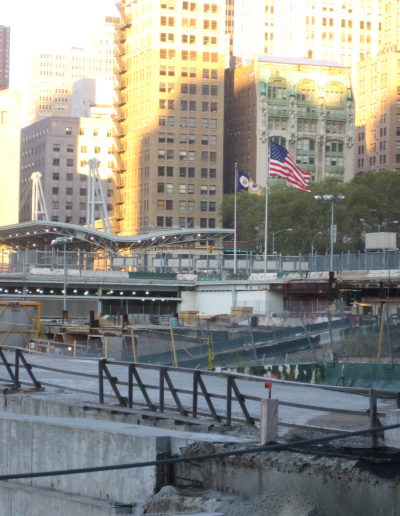 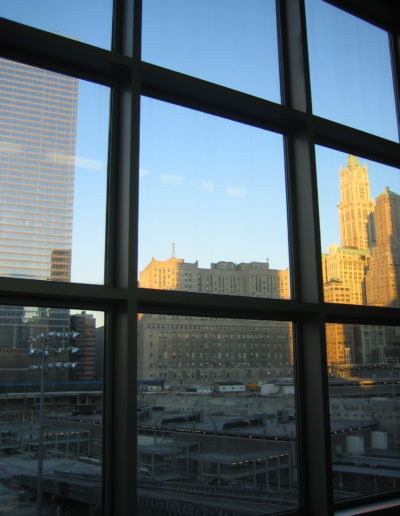 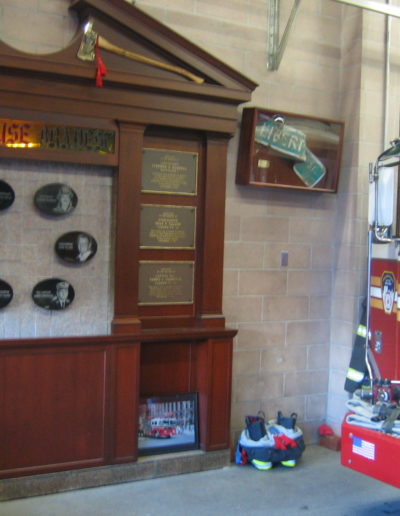 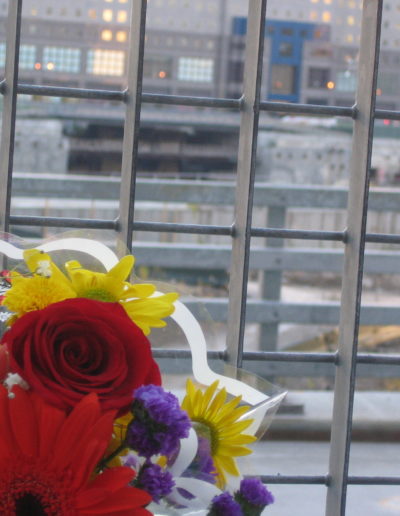 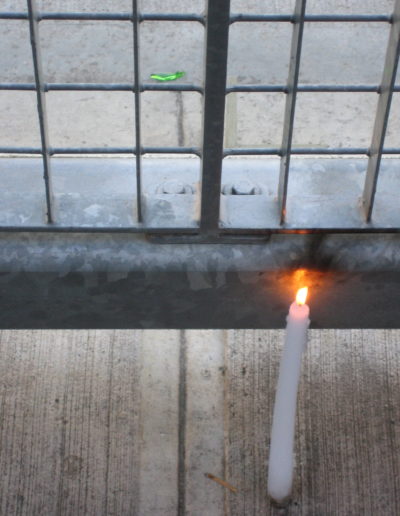 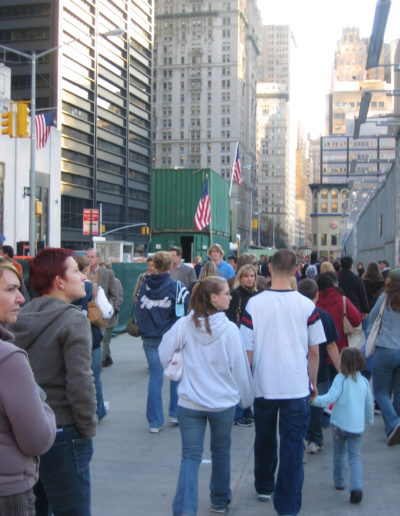 This is from my Myspace blog from Nov 12, 2005 upon my visit to NYC and Ground Zero. I decided to dig it out, reflect and repost.

This morning my wife and I headed down to WTC Ground Zero. I have not been to New York City since prior to September 11, 2001. Of course, like many of you, those events had a profound effect on my life. For some reason I’ve been fighting with demons in my mind from that day for a number of years.  I decided that I would lay them to rest with this visit to NYC. My trip to the Ground Zero site was more important that the gig that brought me here.

Since I found out that I would be coming to New York, I wondered how I would feel when I got down to the site. I’ve known since 9/11 that I would someday visit the place where the attacks occurred.

I have many fond memories of my visits to NYC prior to September 11, 2001.  My trips in the past have always included a visit to the World Trade Canter (WTC) and sometimes staying at the WTC Marriott. One of my best friends worked at Cantor-Fitzgerald on the 105th floor. I’ve visited him there and went to dinner at Windows On The World restaurant (107th floor) . I’ve looked out of his office window and seen helicopters hovering directly across from me. I’ve seen clear endless blue skies so brilliant that your eyes water. I’ve looked down from the 105th floor to the street below as a parade passed by. Have you ever seen a parade from above? It was amazing. Words unable to fully describe the image.

It was a great experience to share a typical Friday work day with my friend – and make some new friends along the way.  Needless to say, some of the people I met at Cantor that day are gone from this earth. I remember their faces like I remember the New York City skyline.

Fortunately, my good friend at Cantor started working else where a month prior to the attacks.

When we flew to NYC, I saw the hole in the night sky where the buildings once stood.

Today (November 11, 2005), my wife and I decided to journey to the WTC site. I was apprehensive about what I was about to experience. The streets we as I always remembered them in my many visits to NYC. I’ve been there so many times I sort of know my way around. It’s strange that this boy from Texas feels completely comfortable in NYC – just walking the streets. But this time was different. Today, I was on a pilgrimage. So, we walked slowly and silently as the city was going about its business. The deeper into lower Manhattan we walked and the closer to the WTC site we got, the quieter and slower things seemed to become.

As we turned the corner and I saw empty sky where my favorite land marks once stood. It took my breath away. It was like diving into cold water. The skies were clear and blue much like the day that I visited my friend there so many years before.  To say that it was surreal is an understatement – it was like a dream.

I felt deja vu…. but I HAD been there before. The loud streets of the city were silent as hundreds of people moved in slow motion around at the site. I tried to focus on something in the sky that had been there before. It was no longer there. I was like my memory was trying to replace the images in my mind…  I closed my eyes and could see the two giants. I wanted the giants to be there when I opened them again. I wanted everything to be the same as it was before…  I opened my eyes and I was greeted with blues skies.

Never in my life had I hated clear blue skies, but for a few moments today, I did.  I hated what those blue skies meant in that place. My two giant friends were gone.  Out of the blue skies came the attacks that toppled them and cause sane, able-bodied people to jump to their death. As I walked closer to the pit, I could feel that I was in a special place, a place were a terrible thing happen – a terrible thing that had left a wound on my soul. It still hurt every time I remember that day.

I will never forget the chill in the wind today. I’ll never forget what it felt like or what it smelled like. I walked up to the fence to see what was not there. It was strange… I stood at the fence a peered in. I was in disbelief. I was afraid and confused.  I was afraid that I was going to breakdown in front of everyone. God gave me strength as tears filled my eyes…  I had my sunglasses on, so I would be ok.  No one would know my tears. Suddenly, I felt like I was the only one there.  I was alone.  Just me and that place. It was quiet and still as the sun warmed my face in the chilled air.

I closed my eyes and saw the buildings crumbling in my mind. It was real.  I opened them and nothing. All those poor people… gone.

I was battling with my demons from September 11, 2001 in the spot where it happened. I picked the place for the fight. I had already decided that I would win. I would win it on the very spot where it began 4 years prior. I had prepared for this day. I knew it would come. I mumbled a little prayer to myself.

A cold wind hit me in the face and I was awakened, as if from a dream. I returned to reality. It was as if God had allowed me to have a moment for just me in a busy city full of people. For me to battle… To finish the fight and release the grief and anger to him. And it was a good fight. I could only imagine what my wife would be going through if we had a different life and we happened to live in New York and I worked at WTC… and went to work that day not to return. I felt so thankful when she walked over and put her hand in mine…

My life changed today. My reality changed. As we walked around the site, I noticed men working…  machinery moving earth. I noticed grass and wildflowers growing in the excavated area – life!  Life was moving. There was life in this place.  It was wonderful to see. My sadness turned to joy. I knew all was good in the hands of a good God.

I looked into the blue sky and I was thankful for its blueness.  I will never curse a blue sky again.

Sacred moments in a special place… Returning to Texas tomorrow.

VIDEO: The 9/11 Survivor Tree – The last living rescue from 9/11—a charred and battered pear tree—has been recovering at a Bronx nursery. Now, it’s finally returning home.

[DISPLAY_ULTIMATE_SOCIAL_ICONS]
← The Gift of Thought - Developing a Theology of Thinking Christians and Culture - What is culture? →