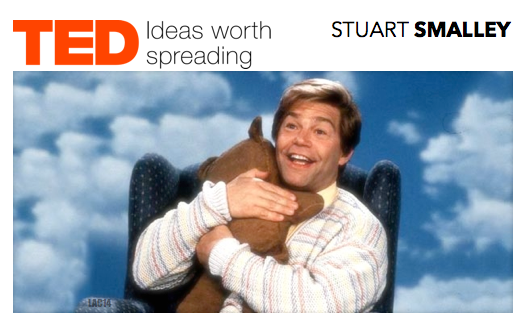 Back in the 1990’s Al Franken did some of his best work on Saturday Night Live as Stuart Smalley. The skit was called ‘Daily Affirmations’ by Stuart Smalley. They were truly hilarious bits. His tag line “Because I’m good enough, I’m smart enough and dogonit, people like me.” made its way into daily conversations and jokes.

I know a guy…
In New York City, you can find a guy, who knows this dude who sells fake Rolexes out of his car in an alley. They look like the real thing. It takes an expert to tell a counterfeit from the real thing. For $50 bucks, you can wear a shiny Rolex (albeit fake) to impress people you don’t even know and risk getting mugged. But, I digress.

What do Stuart Smalley and Fake Rolexes have to do with TED Talks?
Let me start out by saying I think there are several TED talks that are truly ground-breaking and valuable. However, over the last couple years most are fake Rolexes. The presenters look and sound very impressive and appealing at first glance. But they end up completely bankrupt upon deeper investigation. Some of the stuff is down right ridiculous when taken to its logical end.

The problem is the culture that TED engenders is self-aggrandizing as the entire TED community is becoming an ever shrinking echo chamber of ‘intellectuals’ who get their strokes from other intellectuals even when most of the presentations lack intellectual integrity. TED has evolved into an infomercial for new age-sounding ideas where people seek celebrity over solution. There is no robust discussion or debate of truth-claims and ideas. It’s more of a theocracy than democracy.

Notice I did not say that the ‘intention’ of TED presenters was necessarily bad. I assume that most have good intentions. However, they sacrifice intellectual honesty and logic on the alter of exalting self.

What I hear in most TED talks today is, “Look how smart I sound.” It’s all style and no substance. Just like the fake Rolex. Pseudo-intellectualism is not intellectual at all.

The Trade-off
We’ve traded wisdom and discernment for intellectual style. A Harvard degree does not automatically make one wise or discerning. Some of the wisest most effective people in history never darkened the doors of a university classroom.  Wisdom is not found in a classroom or in a theoretical landscape.  Wisdom is found in experiencing reality.

TED Talks: Stuart Smalley
I think TED should invite Al Franken’s SNL character, Stuart Smalley to give a TED Talk. I believe this would provide an humorous but accurate portrayal of what TED presentations have become. “Because I’m good enough, I’m smart enough and dogonit, people like me.”

Are you a fan of TED Talks?