Thank You Ravi – A Story 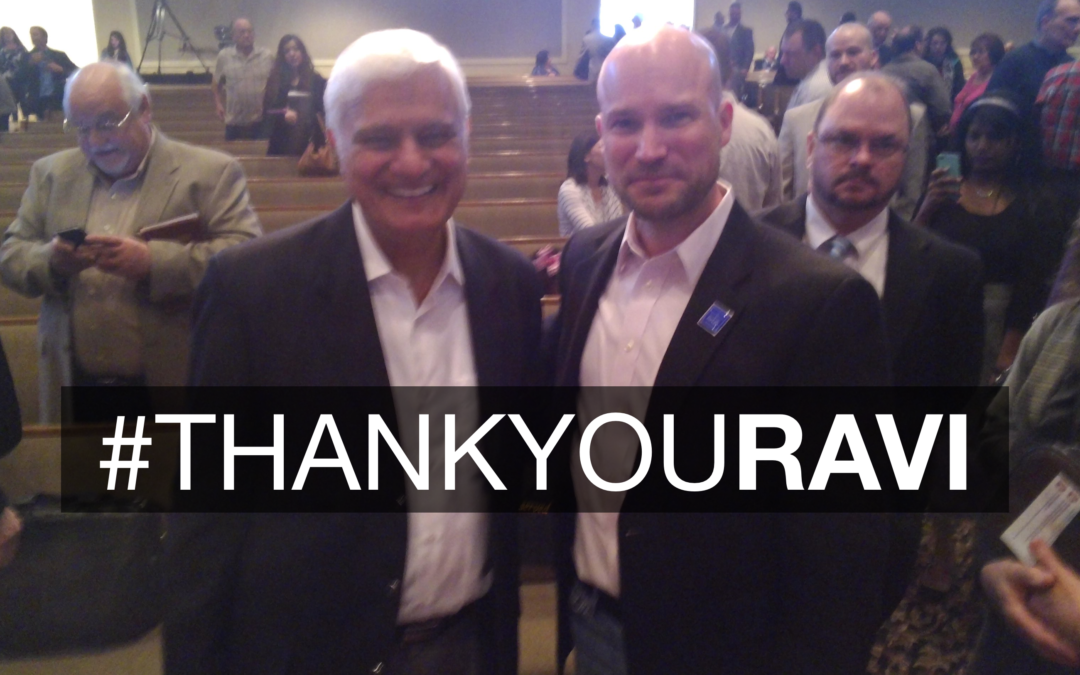 News: Christian apologist Ravi Zacharias has been battling a rare form of bone cancer since March and was recently informed by doctors that his cancer has spread and there’s nothing more they can do medically. He has ceased seeking treatment at MD Anderson in Houston, Texas and has returned home to Atlanta, Georgia to be with family and friends.

Thank you to Dr. Ravi Zacharias and a story…

In early February of 2014, I heard that world renown preacher, philosopher, author and Christian apologist Dr. Ravi Zacharias would be coming to a church in Fort Worth to speak. I’ll refer to him as ‘Ravi’ because his ministry has been a part of my life since around 2009 – He’s almost like family! Although, we only know him through radio, books, videos and podcasts. He is a very familiar voice around our home and God has used him to shape my life and ministry.

About a week prior to his scheduled appearance in Fort Worth, I decided to send him an email. Below this post is that email. I wanted to personally thank him for the impact he has on my life, shake his hand and introduce him to my wife Kathryn. That’s it. Just an good ole Texan, “Howdy and thanks for everything!”

On February 16, 2014 Kat and I showed up at Bethesda Church a little early because I figured there would be a pretty good turnout to hear Ravi. The sanctuary was packed.  We took our seats 20 minutes before the service began.

As Ravi preached, he covered a lot of ground – constantly contextualizing the texts from which he was speaking. He unpacked the story of the Prodigal Son, where the father runs out to meet his disobedient wayward lost son. Ravi noted that it was “counter-cultural” to the way middle-eastern fathers would have treated their disgraced sons. The boy would have been expected to crawl back to the father begging for mercy. But, in Jesus’ story, this father is DIFFERENT! This father runs to meet his hurting boy.

Then Ravi said, “Christ met me on a bed of suicide. I never went in pursuit after him, He pursued me… The Hound of Heaven.”

This is where my story with Ravi began many years prior to Bethesda in 2014. This is where his ministry was legitimized in my mind and where he threw an anchor into my heart. I had been there too, having suffered with depression many years prior (my story here). When someone you don’t know can bear witness to your suffering because they have been there too, there is a deep connection. I knew from 2009 on that Ravi would be able to minister to me and teach me in ways others could not. From then until now, Ravi has never let me down. Sure, he is human and a sinner. I do not put him on any pedestal but, he demonstrated to me how I could walk a similar path – a fearless abiding walk with Jesus Christ. The key word being “Fearless”.

Ravi’s sermon ended and the host pastor closed out the event and dismissed everyone. As expected, a massive crowd flocked to the front of the sanctuary to meet Ravi. I was one of hundreds. With my wife (who HATES crowds) in tow, I made my way up to the front to shake his hand and thank him. This was the first time that it occurred to me that Ravi had become an unknowing mentor of mine.

As soon as we got to the front of the stage, crowds were pressing in on all sides – shoulder to shoulder. Kat pealed off to the stage steps to get away, telling me to go ahead with out her. It was gridlock. Several minutes past and I could see Ravi about twenty feet away. It made me very glad that he was spending a few moments with each person whom he met. Several more minutes past and I was not any closer. I saw a security person flash the 2 minute sign to Ravi’s assistant. I was no closer than when I had set out on my endeavor. In my mind, I decided that it was not meant to be. I resigned to that – albeit a little bristled by being so close but unable to reach my objective.

After looking at my watch, I saw that two minutes has quickly flown by. The crowd had me hemmed in from the front and sides. I lost sight of Ravi, turned around to leave and get out of the crowd. I looked up, scanned the stage steps for my wife, locked eyes with her and started walking toward her in disappointment.

Then, Kathryn’s expression changed and she pointed past me. Her eyes grew bigger and she mouthed the word, “LOOK!” I stopped. You know when your wife gives you a look that tells you everything you need to know. It was like she was saying, “Turn around, silly, you are missing something!”

So, I slowly turned around and I was nearly face to face with Ravi. It was like the crowd parted like Moses parted the Red Sea and I found myself on the other side. No telling what kind of expression was on my face.  My prepared remarks went out the window and I babbled a few words that included my name, “Thank you, sir” and something about an email I had sent a few days prior. Ravi looked at me for a moment as if to check his mental Rolodex (Contact Management System for you younger folks).  His face softened. He reached out his hand, returned the pleasantries and said, “I read your email. Thank you for sending it along.” I was struck by the fact that he actually took time to read it much less remember it. The man must receive a couple hundred emails a day. I had just randomly found an @rzim.org address and hoped it would get to him. It did. I turned around to try to find Kat to introduce her to him but she was far away and just waved at us and smiled. She was there for me more than anything else. But, she did ask a young man with a camera to run up and take a photo of me and Ravi. He did.

Our visit was less than a minute in a half. We took a photo and I thanked him again. As I turned and walked away, I heard my name uttered by a strangely familiar voice behind me.

“Lance!” the voice said. I turned around. Ravi said, “Keep up the good work.”

An encouragement from a gentlemen and leader I greatly respect. “Yes sir, I will.”

As I reflect over the years that have passed since that day and this moment, my response is the same today as it was then, “Yes sir, I will.”

I hope and pray that will continue to be my response until I meet my Savior.

Brother Ravi, our days will continue afresh in the celestial Kingdom with Christ. May God Bless you and keep you and your family in these days. May God grant RZIM a double portion of impact in the decades to come. Whatever time God has ahead of you, “Keep up the good work!”  Fright the good fight.  And may goodness and mercy follow you all your days until you step foot into the everlasting.

I leave with you what you have left with me and so many. Distilled truth bathed in Grace and Goodness from the lips of our Savior … “Because I live, you also will live.” (John 14:19)

Hope this email finds you well.  My wife, Kathryn and I will be at Bethesda this Sunday.  If you could pass a message along to Ravi, I would appreciated it very much.

You and RZIM have been a part of my life for about 5 years through radio out-reach, podcast, books, videos and Slice of Infinity.  The topics, questions and sermons have driven me deeper into God’s Word and equipped me to engage the world with truth in love.  I feel like I’ve been taking an extended course in apologetics with a touch of pastoral ministry.  You have had a profound effect on my life and my personal ministry.  God has Blessed me and those I reach through you all.  Thank you.

We share something in common, sir.  I too nearly ended my own life about 11 years ago (I’m 39 now).
In 8th grade, I accepted Jesus as my Savior and was Baptized. By the end of college, I had become the worst of sinners as Paul in 1 Timothy 1:13-16.

My girlfriend became pregnant and we had an abortion. I gave my approval and sanctioned the death of the innocent.

I came to the end of myself on an early morning in 2003. All of the sin in my life weighed on me and the fact that I had murdered my own child put me over the edge. It was darkness and Satan was whispering lies for me to end my own life. At that moment, the Lord reminded me that I belonged to Him. A glimmer of hope entered the darkness.

It was not an immediate transformation. However, Jesus began drawing me to Himself and gave me Hope in my heart. My journey with Jesus is nothing short of miraculous. I’ve gone from being the worst of sinners to an abiding faith in Christ. I serve as the spiritual head of my loving family.

About three months ago my mother revealed a dark secret she had been hiding since before I was born. When she was pregnant with me, her marriage to my father was falling apart. She went to her doctor and asked about an abortion. He told her that he did not perform abortions. So, this lonely, angry, frightened young mother chose life.

Even while I was in my mother’s womb, God’s sovereign hand protected my tiny life. Even as He knew the choices I would make later in life, He protected me. I live Jeremiah 29:11-12

I currently serve as Chairman and Director of the ForLife Initiative at Christ Chapel Bible Church in Fort Worth. I have experienced healing and forgiveness the same way I was saved, by grace through faith in Jesus Christ. On SOHL Sunday 2014, I told my story to our church family (7000 people). I went ‘all-in’ with Christ in order that he may reach those walking wounded among us and encourage men to step forward, get healed and join me on the battled field.

The years of ministry/training/encouragement from you and RZIM played a huge part in demonstrating the boldness and abiding faith I would need to step into such a hostile battle ground. I thank you for being obedient to your calling and God for calling you.

I hope to personally shake your hand and thank you this Sunday at Bethesda. Most importantly, introduce you to my wonderful wife, Kat. Obviously, if that doesn’t occur, please know that you, your family and team are in my prayers.

May the Lord go before you and prepare hearts to receive the Gospel of Grace through you.

ps. Sorry this was so long.