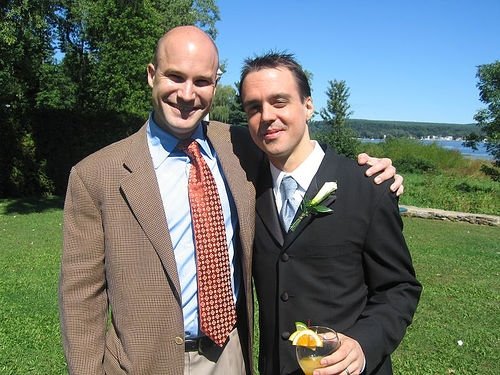 The US Elections are one for the history books. Here is my analysis. Please bear with me as I draw on chords that lead to what just happened in the US last night. Please understand, I’m making broad observations above politics.

A good friend of mine in Montreal Canada posted a comment on Facebook this morning. He and I are on different sides of the political spectrum. Let me provide a backdrop to our friendship.

Alex and Me – Friends from opposite ends of the political spectrum

In 2004, Alex booked me for a gig at StereoBar in Montreal. I stayed with him and his family. We all enjoyed a home cooked meal as the snow fell on the city. It was a record snowfall. GW Bush was in office. We had a lively political debate and I so enjoyed their company, I remember it fondly to this day. We tolerated each others differences and embrace each other in friendship. Both of us lost our fathers way to early. We share that loss, vigorous debate at times and a love of house music.

Alex’s Facebook post this morning (after elections):
“Urgh. Brexit, Trump – This is what happens when you continuously talk down to people who already feel that they have nothing, and are angry about it. In 2016, working class beats smirking class.”

Alex is spot on in his analysis. Remember, we are from opposite ends of the political spectrum but we find agreement here.

Regardless of race, gender, ethnicity or faith, I believe most people just want to work, enjoy family and be generally left alone. For the past 20 years, the establishment has trespassed into the lives of normal folks trying to live quiet normal lives. Trump and Sanders are what you get when the establishment starts exerting its will on everyday folks. I think ‘the Bern’ phenomenon speaks just as loudly as Trump. There has been a shift in American political culture.

I think the turnout in the US will be a study into the anthropology of a cultural shift.

What cultural shift?
Let me draw on some historical chords that stand out in my mind. I’m not positing moral equivalency here. I am simply ‘thinking out loud’ for the sake of discussion.

Baby-Boomers
The Woodstock Flower-Power generation challenged the established authority and found unity in disrupting the status quo. They activated for racial equality, freedom of speech and expression, sexual freedom and anti-war. Somewhere along the line, this movement was subverted by an insurgent movement emanating from the academy (universities). 30-40 years later, the anti-authority Boomers became the established authority in America. They eventually violated their original cause. They undermined the very freedoms they fought for in the 1960s. That was one cultural shift worth noting.

Arab Spring
In 2010, the world witnessed a populist uprising against the establishment in a few countries in the Arab world. This is still unfolding six years later. But, its worth noting, it began with everyday folks rejecting the establishment.

Brexit
This year, the UK surprised the world when it held a referendum to leave the EU. The people voted to challenge the establishment. This is still unfolding.

Bernie Sanders and Donald Trump
As an anthropologist and student of culture, I don’t know what is more interesting, the Bernie phenomena or Trump’s victory. If the Bernie would have been allowed to run against Trump, I think he would have won handily (not by a landslide but handily). However, the DNC establishment wanted none of it. I know Sanders supporters who voted Trump because it’s not a left vs right thing anymore… it’s a establishment vs the people thing. Bernie brought that to light and Trump played that chord. It resonated with the people.

Bernie and Trump supporters are at opposite ends of the left vs. right spectrum. Yet, they are in agreement in their challenge to the political and economic establishment and power structure. Their means are different but they both are convinced the status quo must go.

So, here we are on the first page of a new chapter in history. As the ink spills and fills the future pages of this book, it is worth noting ‘what the heck just happened’ is not a political shift but a cultural shift. Politics and legislation are lagging indicators of the culture. The anti-establishment movement is the new establishment. Hopefully, it does not succumb like past movements.

As the Zen Master once said, “We’ll see what happens….”