Will you know it when it happens? 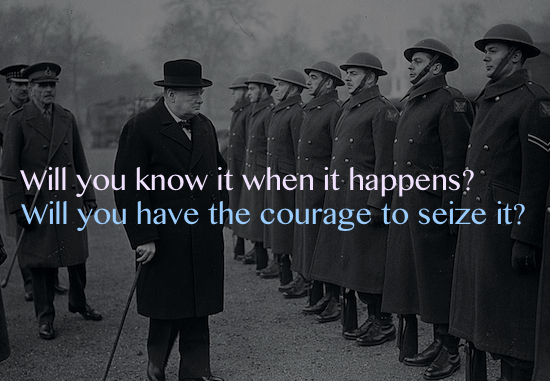 “There comes a special moment in everyone’s life, a moment for which that person was born…. When he seizes it… it is his finest hour.” – Sir Winston Churchill

I don’t know much but I know this statement is true. Every man and woman on this planet has a purpose. That purpose may not be immediately recognizable. It may be months or years before our experiences unfold to reveal that purpose. However, you must recognize it and seize it.

Ah-ha Moment
At some point you will reach that moment when you step into the place for which you were created. If you are aware, you will seize it. And like a professional golfer who seemingly places the ball where he wants with ease or concert pianist who allows the music to play her, your life culminates into one moment of precision and beauty where your light will shine.

Sir Winston Churchill is a perfect example. He was a poor student. He failed at business. People said he would amount to very little. However, when the Nazis attempted to conquer Western Europe, Churchill was the only man for the job. He was called to it. He shined in that moment and stood against the overwhelming forces of evil. Ironically, the man who lead his nation to victory was voted out of office by the people who once loved him.

William Wilberforce is another example. He was born in England in 1759. We was a small sickly child and would become a man of short physical stature with a hunch back. Wilberforce eventually became a member of British Parliament. He had an all consuming passion to abolish slavery on which the entire British economy was based. A fellow member of Parliament once described him as a ‘shrimp’ on the floor of the chamber but when he rose to speak, Wilberforce became ‘a giant.’ For 50 years, he railed against overwhelming opposition and threats on his life. On his death bed, he received word that the Slavery Abolition Act of 1833 had passed. Wilberforce died three days after hearing the news.

I am convinced that if you are alive and reading this, you have a moment for which you were born where you will shine. It will be your finest hour! Perhaps, you are living it now. Maybe, it is in the future waiting for you?

Will you know it when it happens?