Iraq: How did I get here? 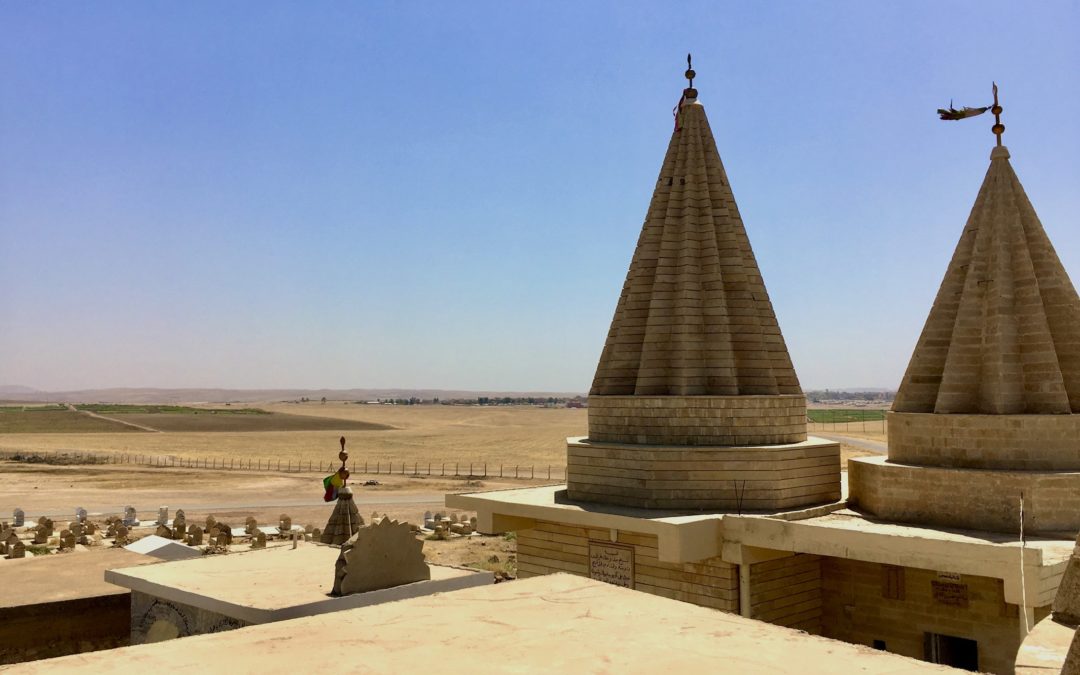 The this is a continuation of a previous story, you can read the first part here ….

It’s the end of August and I am sitting cross-legged on a rug in a refugee camp in Northern Iraq (Kurdistan). A girl politely places a glass in front of me containing very strong piping hot tea loaded with too much sugar. I can’t understand the quiet conversations going on around me as our team and our hosts settle into their spots on the rug along the dark walls of the tent. The inside of the tent is a cool oasis from the scorching 109F heat of the day. As if on cue, everyone begins stirring their tiny teas with tiny spoons. Everyone smiles at one another as a strange symphony of chiming metal against delicate glass fills the space. I don’t know our hosts except from reading about them but I feel quite welcome.

I am seated across the tent from a group of shy but seemingly contented Yazidi women and girls recently rescued from the Islamic State terror group (ISIS). ISIS terrorists are masters of human trafficking among other evils. Women and girls are stolen from their homes and sold as sex slaves. The boys are turned into child soldiers, suicide bombers or simply discarded. A few months ago, these women and girls were experiencing horrors beyond the bounds of human comprehension. Just thinking about what they’ve undergone is more than enough to break your heart and mind. But, they are survivors and resilient.

The epicenter of something massive on a global scale

Its difficult to fathom exactly how I got here. Yes, I flew from Dallas-Fort Worth to Frankfurt, Germany to Erbil, Iraq then drove north for a few hours. But, thousands of tiny threads converged to arrive at this moment. This is the epicenter of something massive on a global scale.

Two years prior, on a chilly morning I was invited to a meeting with the Fort Worth Police Department to address the sex-trafficking epidemic in Fort Worth. This small group of loosely affiliated agencies and non-profits were trying to get their heads around the problem. We were pressented with cases where little girls were being bought and sold for sex in my city, I was in a state of shock. The police department was overwhelmed. Local government was in disbelief and I’m considering vigilante justice.

Fast-forward a year. I’m now deeply involved in a taskforce combatting human trafficking in North Texas. The tiny group has grown to over 50 agencies, non-profits and departments. Over previous 12 months, I’ve made connections across the country with leaders and agencies dealing with the issues of human trafficking.

One Thursday evening, I’m preparing to leave my office when I get a call from a woman in our church who is in a US city that will remain unnamed. She’s a part of our anti-trafficking community, she’s a friend and she’s attempting to rescue a girl and her infant baby from her trafficker.

I hear fear in her voice. She’s at an airport with the victim, the victim’s baby and another woman assisting the rescue. The trafficker is part of an organized gang, very dangerous and issues an ultimatum to the victim; “Be at my house by 11pm or I’ll kill you.”

I’m sitting in my office in Fort Worth 8 hours away staring at a clock on my laptop screen edging closer to 6pm. The victim can’t board a plane because her trafficker has confiscated her ID. The women can’t leave the airport because he may have people looking for her. Local law enforcement cannot be trusted and hospitals are not geared up for this type of situation – they will just call the police. She can’t go to her parents because one of them sexually abused her for years. The three women and baby are stuck. They begin to panic.

I begin thinking and praying through the situation. The safest place at this point is the airport. But, they can’t stay there all night without raising suspicion of airport security.

From my office, we make a plan to get them to the airport hotel and into adjoining rooms. One room is for guests with physical disabilities. That way, they would be near an elevator and they could activate emergency devices in the room to call for help. They could flee to the adjoining room if necessary. Our plan was a tiny bandaid on a massive problem. They didn’t know if they were followed. The victim will be going through withdrawals from Oxycotin soon (her trafficker keeps her doped up in order to control her). She will need medical attention and aftercare to stabilize her from years of trauma. The baby will need formula and fresh diapers.

I’m thinking, “What the heck are we going to do? I have a friend in a potentially deadly situation and I have no way to help.” It’s now approaching 9pm. I’ve called everyone I know with access to aircraft. I considered renting them a car but then they would be driving for several hours without protection. I’m out of ideas. My assistant and I are staring at Google maps and the clock. We were both praying. This situation is far beyond our abilities or experience. We’re in way over our heads.

Then it hit me, “Wait a second! I know someone who knows a guy who deals with this type of situation!” I made a phone call and we prayed. “Lord, help them, help them …” That is about all we could pray at this point. We sit and stare at the clock. Nothing is happening. Minutes are rolling by. Still nothing.

Finally, I get the call I’ve been waiting for. First thing in the morning, a private plane will be dispatched to a small municipal airport outside the city. In the meantime, a retired US Special Forces guy will be parked at the hotel to keep watch over the sleeping girls. Like clockwork, the next morning (Friday) a plane arrives and the security team bring the victim, her baby, my friend and another young woman back to Fort Worth safely.

On Sunday, the victim (now trafficking survivor) is receiving care in a local facility and her infant girl is at our church for Sunday Services (in the caring arms of a young woman who agreed to babysit while her mom received treatment). When I got word the baby was on campus I knew I was walking under the gentle rain of answered prayer. Incredible!

There are people in our world willing to risk their lives to rescue forgotten women and children from evil and walk with them toward restoration. I had to learn more and God opened the door for me to do just that… I will take you on that journey.